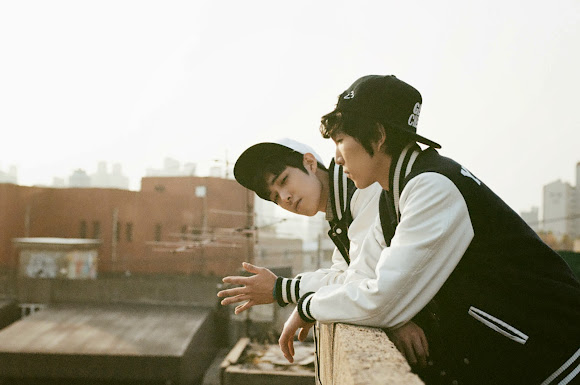 South Korea's Glen Check borrow the synth downbeat of disco boogie-era Temptations and produce an 80s influenced funky modern delight. "I've Got This Feeling" is a new maxi-single featuring remixes from Disco Filter favorites such as Kartell, Tesla55 and Lorenz Rhode.
It's a track off their recently released full-length YOUTH! which is a fantastic pop disco album with catchy, rhythmic tracks. They include something lacking from a lot of dance music these days, vocals, which I think can allow for a deeper emotional connection with music. I recently caught up with Glen Check by email and asked them about it.

Disco Filter: How is your new album different from your previous recordings?

Glen Check: We always try to do different things on every album. For "YOUTH!" we focused on creating a wild and young sound texture without using obvious synthesizer sounds or drum machines. We were inspired from 90's cheap keyboards and guitar plucking, as well as layering drum machines with acoustic kits.

Disco Filter: You were recently in Austin for SXSW. What kind of touring are you doing to promote the album?

Glen Check: This was the first tour we ever did actually. We didn't have the chance to promote through touring until now, but we felt a strong beauty from it and earned confidence as well. SXSW was crazy, everybody seemed happy and high during our show. We're planning on touring more often.

Disco Filter: What is the dance music scene like in Seoul? Are there other acts similar to you guys? Do you get a lot of support from the S. Korean media?

Glen Check: We think Seoul is the next big city. It definitely deserves attention as the scene is very active with lot of artists. We were distinctively different from other bands when we first started to get attention, but now we see new bands doing similar things while we try to do new things from what we've done.  Yes, we get support from the media, they play a lot of our tracks on TV, radio etc.

Disco Filter:  One of the biggest cultural exports of Korea is K-Pop. We have a fun K-pop night here in Austin, for example. What are your thoughts on the modern state of K-Pop and does it have any influence on your music?

Glen Check: Well, we don't listen to any K-pop or get influenced by it, but we still think it's great that K-pop is getting bigger, since in most music histories around the world, the pop scene gets the spotlight first and then the independent or underground scene gets it next. Now it's about time to show the world that the Korean underground scene is cool.

Disco Filter: What is your live setup and how does it differ from what you do in the studio?

Glen Check: In our studio, we just record with whatever we have in a laptop, while our live setup is more organized with cables and synthesizers. It took a lot of time for us to make a live setup, but we're happy with the setup for now.
at 9:16:00 AM