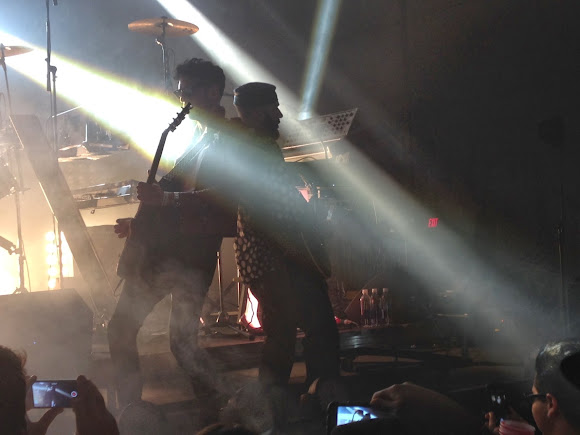 The epic musical adventure that is South by Southwest has come and gone. More than 2,000 musical acts played in venues around Austin, Texas for five days. While this year's SXSW was marred by tragedy and the surreal Doritos-sponsored vomit pop art of Lady Gaga, we managed to take in a lot of excellent performances.

Highlights included seeing disco funk kings Chromeo while standing 20 feet from billionaire computer nerd Michael Dell. The show started with P. Diddy coming on stage to praise Dell as a "great entrepreneur." He came out of nowhere and didn't introduce himself, and a lot of people (including us, who had just arrived) were like, "Hey, who's that guy? He kind of looks like P. Diddy."

Also amazing was seeing R&B princess JoJo perform her 2004 hit "Baby It's You" a few days later at the Fader Fort, a venue that offered unlimited booze. Her voice was amazing and she was definitely not lip syncing.

We got to catch L.A. synth-pop brats Holychild play their hit "Happy With Me" at a multi-day venue set up in an empty commercial space by the music blog aggregator Hype Machine, which hired  bloggers to curate the lineup.

But for me, the highlight was seeing Sydney producer Wave Racer play a 45 minute set in the middle of the day. Because of a series of strange events, we were positioned behind the stage for his performance. To hear his sugary, hyperactive dance music from a sound system that included twelve 15 inch subwoofers was incredible.