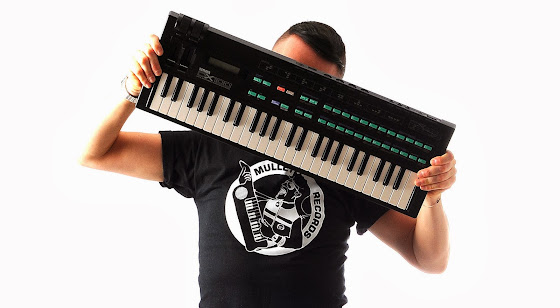 One of the most fascinating nu-disco albums I've heard this year is "Life in 3D" by Casio Social Club, a project of UK producer and Mullet Records founder Justin Winks. The album captures so authentically the early 1980s post-disco sound, but recreates it with modern production values. "Life in 3D" was released earlier this week, so hit play on the preview and read our interview with Casio Social Club

Your new album draws heavily on 1980s post-disco influences. What interests you about that genre? How did you get into it? Who are some of your favorite artists?

Well, the early-80s sound has been with me since I was a kid. I grew up listening to it, so I feel it's kind of part of me, which might sound a little cliché but it's the best way to describe how engrained I feel the sound is!

From around 1980 onwards, dance music went through a very radical change. Many of the conventional instruments like drum kits and bass guitars were replaced by drum machines and synthesizers, but were still played by very talented musicians, and in a very soulful, organic way.

Straight-up disco was a very uptempo sound. It was infectious, with a very fast tempo that in some cases went well over 130 beats per minute (BPM). The disco sound was also musically quite traditional, and by that I mean it used conventional drums, lead and bass guitars, brass and strings, etc. All this changed when producers started using drum machines and synths.

So around 1981, a new and very radical sound appeared that was very electronic but still had soul. In the UK, this genre was called "electro funk," but in the US it was called "freestyle." I was fascinated by it, and simply couldn't get enough of it. It was the very first time that these new drum machines and synthesizers were being used in popular music recordings, so it was like hearing nothing else you'd ever heard before.

Some of the best examples of this sound were by bands like High Fashion, D Train and Imagination. The electro funk sound was slower than disco, say around 115 BPM, and therefore really retained it's groove. An example of a freestyle track that crossed over to the mainstream pop charts would be Shannon's "Let The Music Play."

The track was produced by Chris Barbosa, one of my favorite producers. Chris was responsible for producing many of the cross-over hits of the time. The electro funk sound seemed to spread very quickly, and even the likes of Madonna got in on the act by hiring hot producer John "Jellybean" Benitez to inject that sound into her early recordings.

From 1981 to 1986 the electro funk or freestyle sound seemed to dominate the airwaves. On the back of that, crazes like breakdancing, body popping and also turntablist DJ culture were born.

Unfortunately, I was still too young to go the nightclubs of the time, but I was still exposed to the music and was saving every penny of my pocket money to buy the latest twelve inch singles that were mainly coming over from the US. For me, it was a truly magical time, as the music was so uplifting and the sounds that were being used in the recordings were simply mind blowing!

My sound, however, isn't solely based on electro funk and I like to think that my Casio Social Club productions draw influences from many areas of dance music, as I've been actively buying dance music for over 30 years.


What is your music production workflow? How do you go about producing early 1980s sounds using technology from the 2010s? Any specific software or hardware you particularly like?

It's no secret that I'm a huge Reason fan and use Reason to make all of my Casio Social Club productions. Over the years, I've used both Logic and Protools but Reason is the one for me. It's so simple and intuitive that you can go from a sketch to finished track in no time at all.

Basically, I found both Logic and Protools incredibly complicated to use and quickly ditched them in favor of Reason. I agree that the early versions of Reason were quite limited, but these days it's a fully functioning production beast that's incredibly versatile but still a breeze to use.

I've owned lots of interesting hardware over the years, such as the Oberheim DMX drum machine, and classic synths like the Roland Juno 106, SH101 and Yamaha DX100. But to be totally honest I rarely use them, as my Reason patch library has everything I need. I still however use my DX100 and Banshee Talkbox to get that classic Roger Troutman sound, as Autotune just doesn't cut it for me.

Before releasing any music at all, I spent almost a year gathering and making all the right sounds that I wanted to use. This was a very important process for me, as I still use all of these sounds in my productions today. In fact, the Mini Moog style bass sound that I use very often is the same custom patch that I made using Reasons' Subcontractor synth.

Performing live is a common challenge for electronic music producers. How do you approach performing live now, and do you have any plans or ideas for how you wish to do that in the future. Any tour plans for your new release?

For DJing, I use Traktor and have been a big fan of Traktor for many years. For live music shows, I will be using Reason. Reason isn't just a music production tool, it can also be used for many things, including performing live. You can either rewire it to Ableton or simply use it solo, and I plan to tour my "Life in 3D" album this way in the coming months.

What is the music scene like in your community? Some people live in places with a strong music scene that matches their tastes, others find themselves strangely alone and having to rely on the Internet to connect with like-minded music fans. What's your situation?

I feel quite lucky as most of my friends are into the same music as me, and we often get together and play each other music from either vinyl, Youtube or Spotify. Hanging with friends and playing each other new music that you've discovered is such a great way of getting to know what's out there.

Obviously, I use the internet too and rely heavily on the music stores like iTunes, Juno and Beatport for my mp3 purchases. I often check the blogs and also watch the feeds on my Facebook and Soundcloud pages to see what tracks people are recommending.

As far as the UK is concerned, I feel that the scene here is quite flat, as the generation below me seems to be either into dubstep or anything that Simon Cowell and X Factor churn out, and I think that the quality of dance music is definitely wavering as the ever predictable EDM scene expands.

Personally, I think that today's youth are being brainwashed by reality TV shows like the X Factor and should tune into more of what's going on in the underground music scene. Other areas of Europe, South America and Australia seem less affected by the mainstream and are digging much deeper for their music. I think that the nu-disco scene seems particularly strong in countries like Brazil, and I'm planning another tour there in a few weeks time.

Tell me about Mullet Records. How long have you run the label, and what are your plans for the future?

I started Mullet in 2008, mainly to release my Casio Social Club productions, but it quickly grew. Five years on, we've had over 80 releases which have included over 300 tracks. Mullet represents everything I like about dance music and our motto is "Mullet Records... always joining the dots between Soul, Funk, Disco, Boogie, House and New Wave", which kind of sums the label up!

At the moment I'm just sifting through a rake of demos to see what's signable. We get around 10-20 demos most days, so a lot of my time is spent listening to those. We have lots of interesting things planned for the coming months, so you'll have to say tuned to our Facebook and Soundcloud pages to find out more.